Emmanuel Noveen (Manny) Malhotra is a professional Punjabi ice hockey player, currently playing for the Columbus Blue Jackets of the National Hockey League (NHL). Manny is the second player of Indian descent to play in the NHL after Robin Bawa. His father is from Punjab and his mother is a French Canadian. Blue Jackets center Manny Malhotra is making $1.5 million this season and could be in line for a solid raise this summer as a free agent. Malhotra, who grew up in the Toronto suburb of Mississauga, is the only player of Punjabi descent currently on an NHL roster. But he admits he doesn't speak the language. Even though the Blue Jackets have not appeared on Hockey Night in Canada in Punjabi this season, that could change come playoff time. 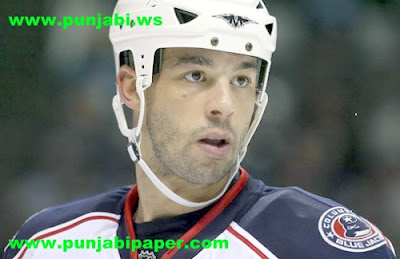 Email ThisBlogThis!Share to TwitterShare to FacebookShare to Pinterest
Labels: Sports

Punjabi Language : Punjabi is Indo-Aryan language of the Punjab in India and Pakistan. Punjabi is spoken by peole of many religions includi...